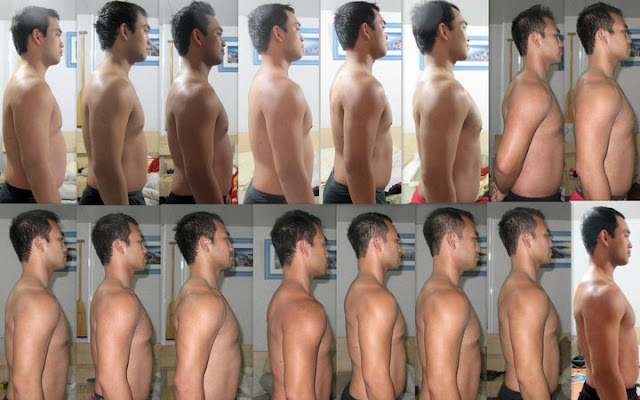 I admit it – I was full of contempt when Joseph Hoang talked to me about the paleolithic diet experience.  You may also know this diet as the ‘caveman diet’.  I believe it’s taken the world by storm, but seriously; to me - it really is just another low carb and low energy diet..

Yet I’ve met Joe who swears by the diet.  Joe is 31 and is an IT consultant.  He is dedicated to his exercise regime of crossFit workouts and has successfully lost around 18kg since commencing the paleo diet.

How did you hear about the diet?
‘I hit a time in my life when I thought to myself, I need to do something about my body.  I want to look good.  My diet was unhealthy and I ate a lot of rubbish.  Takeaway meals such as Chinese, Lebanese or Indian used to be my usual dinners whilst cheesy crackers and chocolate biscuits were my staple snacks.'

'I decided to exercise and I joined the gym.  I gave up smoking.  I got introduced to crossFit training and my coach in Australia at the time suggested that I give the paleo diet a go.'

Your first impressions on the paleo diet

‘Being of Asian background I was worried about the restrictions such as rice, potato and milk.  I gradually took the approach by cutting out one food at a time.  I first cut out all refined sugars so out went the chocolate biscuits.’

‘By this stage I had reached 82kg and I thought it was all muscle.  I was gaining weight but I didn’t worry as I knew that muscle weighed heavier than fat.  I really thought it was all muscle.  Boy did I need a wake up call!’
'I commenced the diet in December 2010.  It took me 3 months to lose the weight.  I dropped down to 64kg which is a 22% body weight loss.  My waist used to be 35cm and I reduced this to 28cm.  I am a small guy so these measurements are better suited for me.’

Breakfast
‘Hangover food’ like bacon and eggs, a large bread roll with BBQ sauce and mushrooms

Snacks
A whole box of cheesy & salty crackers called ‘Shapes’.  I would then start on a packet of ‘Tim Tams’ (chocolate biscuits in Australia).

I would also drink three mochaccinos with whole milk and during the weekends I would drink a 1 litre bottle of fizzy drink per day.

‘At my fattest I was working full-time so I really didn’t have time for exercise.  I was also a smoker so I didn’t have the energy or even the lungs to run!  I was only able to run 200 metres without stopping.  Enough was enough so I quit smoking in 2009.'

What changes did you make first?
‘I joined crossFit, started exercising and cut out the biscuits.  As a result, I lost around 5kg but it was a struggle to lose more.  I had a huge appetite after exercise and really struggled to shift the weight.  I hovered around the high 70s for about a year.  By this stage I was running and swimming.  I even completed two marathons that year but still struggled to shed the extra body fat.  During this time, a friend at work recommended that I cut out carbs from my evening meal.  I tried it and this helped me lose a little bit more body fat.’

‘I then cut out some of my high fat snacks and replaced it with berries, apples, cherry tomatoes and nuts.  For lunch, instead of large sandwiches I chose large chicken salads.  For dinner, I ate roast chicken with steamed vegetables.  Once a week I’d treat myself to my favourite foods such as noodles or absolutely anything I wanted.’

What happened when you transitioned onto the caveman diet?
‘I cut out all of my high fat snacks and ate only fruit or nuts.  I also got inspiration from John Stone Fitness who took photos of his weight loss every day for an entire year.  My photos above are my weekly progress over 3 months.

Was there anything that you could eat on the paleo diet?
‘I did my own version of the diet.  This is how I ate.'

Snacks
Almonds and macadamia nuts.  If I felt naughty I ate cashew nuts, but always plain, never roasted.  I ate these in unlimited quantities, but you get so sick of eating them.  After about 20 nuts you can’t face eating another.  It kept me full until lunch.

Lunch
I ate the same lunch every day!  A small can of flavoured chicken or tuna.  Or fresh roasted chicken with lettuce, tomato and tabbouleh which was based on tomatoes, onions, garlic and parsley prepared with olive oil.

‘I never felt hungry as I always snacked on berries and nuts.’

Dinner
Roast or grilled meat with vegetables such as broccoli or bok choy to name a few.  Potato and sweet corn were not allowed on the diet but I did eat avocado as this was highly recommended.

Dessert
Cup of tea with berries

‘This was the hardest three months of my life but the feeling I had afterwards was amazing.  My stomach felt tight like I had abs all the time.  I felt surreal.  I was eating such an unhealthy diet previously that I didn’t know what being healthy felt like.  This felt amazing!’

What was the hardest about the diet?

‘The first two weeks was the hardest as I had a huge energy crash.  I was highly irritable and was sleeping at my desk by 3pm.  My shirt would be untucked and my tie swung behind me the wrong way around.  I also had to cut out yoghurt and milk which I really loved.'

How are you maintaining your weight loss?
‘I maintained the diet but re-introduced carbs.  I eat carbs only in the form of sweet potatoes as it's a low GI food.  I was not keen on pasta and rice as I always noticed that I felt sleepy after eating these.  If I was out with friends and I ate rice, particularly Jasmine rice, then I would be the first to be asleep at the dinner table!  I still have a cheat meal once a week where I still choose to eat rice, pasta and other favourite foods.'

Lunch
Avocado and chicken salad with salad greens, tomatoes and another sweet potato

‘I continue to snack on fruit and nuts all day.’
Dinner
Similar to lunch

‘I eat dinner quite late as I train after work for almost three hours.  Sometimes I feel a little faint during training and hence why I introduced carbs back into my breakfast and lunch.'

Your last words before we bid you farewell?

‘It was the best thing I did.  At first it was one of the hardest 2 weeks during the crash, but then it all came together.  The satisfaction of securing tight abs made it totally worthwhile!   I’ve made it to the top 30 for crossFit and I have also made it on TV last week.  If you'd like to watch the clip where I am exercising then check out this video on 'The Box UK' on Ramp Training

The purple impression
Thank you so much Joe for sharing your inspiring story with us today.  The positive changes for Joe are that he stopped smoking and he is exercising successfully at a competitive level considering that he never exercised previously.  He is also eating fruit and vegetables which are a valuable source of vitamins, minerals and anti-oxidants.


I have recommended that Joe introduces carbs pre-exercise in the form of smoothies, fruit and yoghurt or in another format that is easy to digest and is acceptable for him.  This could help improve performance and avoid the ‘dives in energy’ that he has experienced previously.


As he trains for up to 2-3 hours per each exercise session, he may benefit from a sports drink during training to replace electrolytes and provide additional energy.

The diet over a short period of time has clearly been helpful in reaching Joe's weight loss goals.  Joe was insightful and was able to recognise when he needed to increase his energy intake through carbohydrates to meet the high demands of his exercise routine.


I still feel that Joe can reach peak performance if he increased his intake of carbohydrates pre and post training.